For a company that comes outside and says specs do not make a phone good, they certainly do pack from the heat in an effort to get people excited. On paper, this thing is a beast, including a optional 8GB RAM + 128GB storage (or even 6GB + 64GB), double rear-facing cameras (20MP + 16MP), 5.5? FHD Optic AMOLED display (1080p, 401ppi, 16:9), NFC, fingerprint reader, USB Type C, Snapdragon 835 processor, and plenty of other stuff to get us Android nerds pumped up.

On the drawback for specs, this phone is lacking something which many different flagships have in 2017, that being water resistance. I mean, pretty much every phone has this today; even HTC devices. I know that OnePlus can't put everything within this phone only because they have to keep the price down, but even minor water resistance would have been appreciated. Heck, I'd pay an extra $50-75 for this, and I'm positive I'm not the only one. Beyond that, you can't complain about a lot of in terms of specs. This telephone pretty much has all of it. 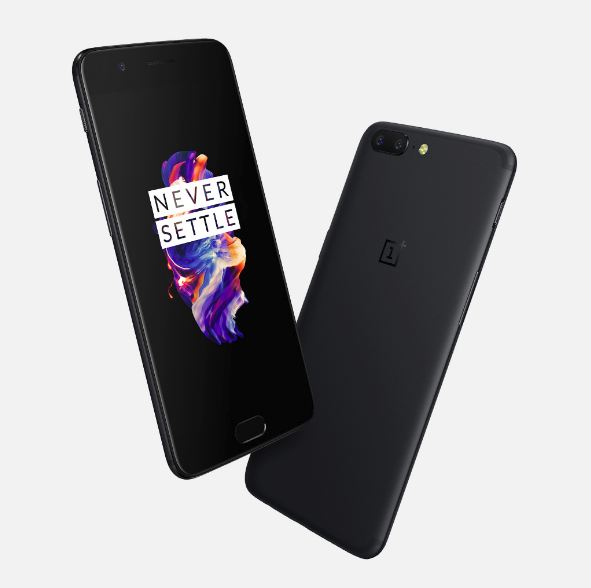 At a quick glance, especially in the event that you use a cover, the more OnePlus 5 appears like a season's OnePlus 3T. In the event you shed the cover, though, you may notice minor changes to the layout -- changes that I really like. The telephone is slender, resting nicely in both hands, but its trendy metallic atmosphere is smooth and elegant. The back has a subtle curve for this, bringing the word "elegant" to my mind. This hardware and construct is striking from a still young producer, however its not quite surprising from OnePlus; they've consistently taken design seriously.

While I think that the phone is stunning, it will seem rather plain once you have a look at the iteration from the past year's telephone for this. It is only a slight change to the overall feel and appearance (double cameras this season), however also the frontside is as equal as you can get. Not to say the front is awful, but it only appears that OnePlus didn't want to repair something that was not broken. We've got phones with exceptionally thin bezels at 2017, therefore I would have seemed to see greater effort made to present an overhauled front. We have heard OnePlus discuss that, so my guess is that we can expect a radical change in 2018.

This year's screen is exactly the same 5.5? FHD Optic AMOLED we've had in previous generations, but with Gorilla Glass 5 protecting it against scratches and scratches. There's surely nothing wrong with FHD, but also at what stage will OnePlus opt to make the jump to QHD? If the business would like to add VR performance (I hear Daydream and VR is all the rage these days), then a higher resolution will be critical. Then there's also that Snapdragon 835 basically going to waste on a 1080p panel. That chipset is capable of pushing plenty of pixel electricity, and with prices continued to go up and up year after year, there is really no reason not to supply QHD panels from a different organization and include them. Oh, speaking of which, this could be a fantastic time to get a forecast. This past season, 2018, the OnePlus 6 will charge $599 (beginning) and include QHD. Maybe you heard it here first, folks. Again, that is just a prediction.

As you'd expect, just like any device from this business, do not expect to find it in your neighborhood carrier shop. If you would like the OnePlus 5, you are going to have to go through the company's internet shop, beginning at $479. That is the 6GB version. For $539, you can find the 8GB version, however I'm under the belief that 8GB is simply overkill these days. Perhaps in a year or two we'll need 8GB, but right now? Sounds unnecessary, but that's only me personally.

While you wont find it in a store, there is a single good thing happening at this moment -- you may actually get the phone. In past decades, the mobiles from OnePlus will be sold out and nobody would have some great clue when they would be available, however using the OnePlus 5, which has seemingly changed. Excellent job, OnePlus.

This would also be a good time to go over the pricing strategy OnePlus has happening. The very first OnePlus phone price $299 and needed plenty of excitement surrounding it, partially thanks to that awesome prize. OnePlus managed to deliver solidly built hardware at a very competitive price, but that version seems to be going away. That can be OnePlus' most expensive phone nonetheless, and I really don't observe this tendency stopping soon. Since the decades move on, buyers need more and longer, and OnePlus just can not provide everything under the sun in a sub-$450 package. We would have to ditch the double cameras, next-gen processors, stupid quantities of RAM, and think twice about the stuff we are using. That just doesn't seem like the OnePlus manner. This business wants to earn superior handsets, the sort that may compete with Google, HTC, and Samsung.